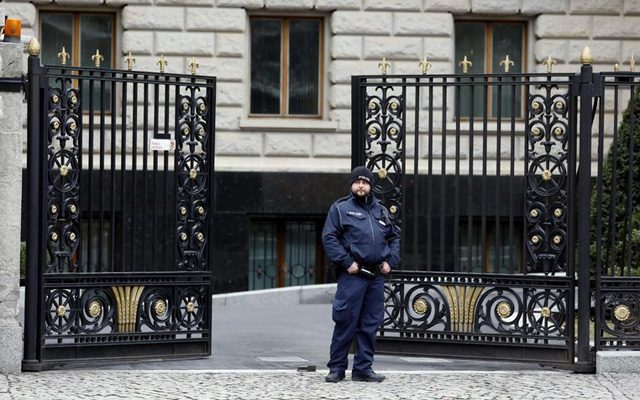 European nations united in a rare coordinated rebuke of Russia on Monday, joining the United States and Canada in expelling scores of Russian diplomats. The expulsions were a show of solidarity with their ally Britain, which alleged that the Kremlin was behind the use of a nerve agent to poison a former Russian spy and his daughter.

Donald Tusk, the president of the European Council, said that 14 European Union member nations were expelling dozens of Russian diplomats in solidarity with the government of Britain, which two weeks ago ejected 23 Russian diplomats who it said were engaged in espionage.

Ukraine, which is not part of the European Union but is fighting a Moscow-backed insurgency in its east, said it was expelling 13 Russians.

Together with the expulsion on Monday of 60 Russians by the United States and four by Canada, the European moves constituted a broad swipe at Russia’s diplomatic capabilities and — if Western assertions about the nature of Russian intelligence are correct — at its ability to conduct spying operations. It also demonstrated remarkable European unity behind Britain, at a time when Britain’s pending exit from the European Union and other tensions have been threatening the continent’s cohesion.

The British government has asserted that the Russian government is responsible for the chemical weapon attack on Sergei V. Skripal, 66, and his daughter, Yulia, 33, and that President Vladimir V. Putin may have been personally culpable. The Skripals, who remain hospitalized in intensive care, were poisoned on March 4 in Salisbury, where Mr. Skripal lives, in an attack that endangered hundreds of people who came near them.

“The world’s patience is rather wearing thin with President Putin and his actions, and the fact that right across the NATO alliance, right across the European Union, nations have stood up in support of the United Kingdom,” the British defense secretary, Gavin Williamson, said on a visit to Estonia, which expelled two Russian diplomats. He said of the expulsions, “I actually think that is the very best response that we could have.”

Jacek Czaputowicz, the foreign minister of Poland, which expelled four Russians, called the poisoning of the Skripals an “unprecedented attack on civilians with the use of chemical weapon, unseen in Europe since World War II.” Russia’s overall goal, he said, is to “disrupt international order and create a sense of danger.”

He said the Russian ambassador, Sergei Andreyev, and three other diplomats were now considered “persona non grata,” giving them until April 3 to leave the country.

Of the European Union members that expelled Russian diplomats, Germany, France and Poland each ordered four Russian officials out of their countries; Lithuania and the Czech Republic three each; Denmark, Italy and the Netherlands two each; and Croatia, Estonia, Finland, Latvia, Romania and Sweden one each.

“The nerve agent attack represents a clear threat to the rules-based international order and to the rules that were established by the international community to ensure chemical weapons would never again destroy human lives,” said Chrystia Freeland, the Canadian foreign minister. “This is part of a wider pattern of unacceptable behavior by Russia, including complicity with the Assad regime, the annexation of Crimea, Russian-led fighting in eastern Ukraine, support for civil strife in Ukraine, Georgia, Moldova and other neighboring countries, interference in elections and disinformation campaigns.”

Romania’s foreign affairs ministry released a statement calling the Salisbury attack “a threat to our collective security and international law.” It said the European Council “agrees with the U.K. government’s assessment that the Russian Federation is most likely to be responsible for the attack and that there is no other plausible explanation.”

Anthony Glees, the director of the Centre for Security and Intelligence Studies at the University of Buckingham in England, said such expulsions would hurt Russia by limiting its intelligence gathering capabilities. Unlike with expulsions in Soviet times, the Russians no longer have Eastern European allies who can carry on the work for them, particularly in Britain.

Ian Bremmer, the president of Eurasia Group, an international political risk consulting firm, wrote on Twitter that the Trump administration’s expulsion of 60 Russians and closing of the Russian consulate in Seattle was “a bigger move” than what the Europeans were doing. “Getting harder to say Trump’s treating Putin with kid gloves,” he added.

The Polish counterintelligence agency also announced the arrest of a man it accused of spying for Russia and passing along information about sensitive energy projects. Stanislaw Zaryn, a spokesman for the minister of secret services, said the man, identified only as Marek W., was employed “overseeing the economic investments in Poland” and “gathering funds for diversification of gas supplies for Poland.”

“He had access to information crucial for Poland’s energy projects,” Mr. Zaryn said on state television. Marek W. was arrested on Friday and, if found guilty, could serve up to 10 years in prison.

Europe is heavily dependent on Russian gas imports, and Poland has been trying to diversify that supply — a delicate issue for both countries. Gazprom, the state-controlled Russian energy giant, wants to build a major gas pipeline, Nord Stream 2, from Russia to Germany, bypassing Poland — and Poland has been leading efforts to derail the project.