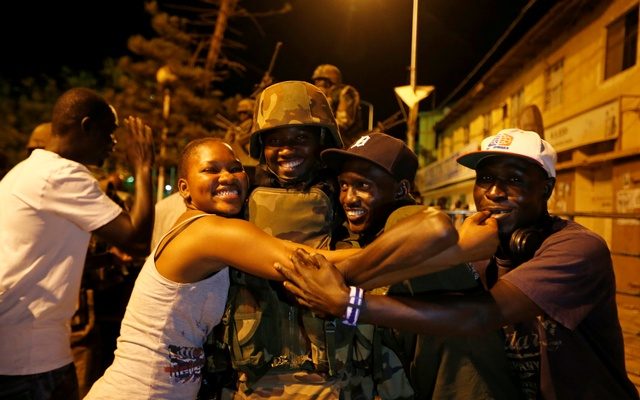 africa
January 23, 2017
Posted By: Amrito Shil 0 Comment
Gambians celebrated in the streets on Sunday after a West African regional military force entered the capital city of Banjul and took control of the presidential palace, the symbolic seat of ex-ruler Yahya Jammeh's 22-year authoritarian regime. Jammeh, who refused to accept defeat to opposition challenger Adama Barrow in a December election, flew out of Banjul late on Saturday en route to Equatorial Guinea as the regional force was poised to remove him. Hundreds of Banjul residents assembled outside State House as darkness fell after soldiers, who deployed on Sunday to secure the country, moved in to secure the compound. Cheering and singing, some revellers sought to capture the moment for posterity, posing for photos with the Senegalese troops. "We are free," said food seller Isatou Toure, 35. "Everyone is so happy that man is gone. We are happy to see (the soldiers). They protected us from Jammeh." Senegalese army officials said the force, which also includes troops from Nigeria, Ghana and Mali, met no resistance as they advanced on Sunday. But even amid the celebrations, troubling details of Jammeh's departure began to emerge. Speaking to radio station RFM in Senegal, where he is waiting to return to Gambia, Barrow said that, upon initial inspection, it appeared Jammeh had looted state resources. "According to information we received, there is no money in the coffers," he said. "It's what we have been told, but the day we actually take office, we will clarify all of it." In a news conference later in the day, Barrow advisor Mai Ahmad Fatty said 500 million dalasis ($11.45 million) had been withdrawn by Jammeh in the past two weeks. The regional military operation was first launched late on Thursday after Barrow was sworn in as president at Gambia's embassy in neighbouring Senegal, but it was halted hours later to give Jammeh one last chance to leave peacefully. His departure followed two days of negotiations led by Guinea President Alpha Conde and Mohamed Ould Abdel Aziz of Mauritania, prompting speculation over what, if any, terms were agreed upon to convince him to step down. "He wanted to stay in Gambia," Barrow said. "We said we couldn't guarantee his security and said that he should leave." Barrow denied that Jammeh had been offered immunity from prosecution in exchange for leaving the country. "Everyone is free" Earlier in the day, the African Union and United Nations published a document on behalf of these two organisations and regional bloc ECOWAS. In it, they pledged, among other things, to protect Jammeh's rights "as a citizen, a party leader and a former Head of State," to prevent the seizure of property belonging to him and his allies, and to ensure he can eventually return to Gambia. Barrow said the document had not been signed and did not constitute a binding agreement. He also said he planned to return to Gambia soon but did not say when. Jammeh's loss in the Dec 1 poll and his initial acceptance of the result were celebrated across the tiny nation by Gambians grown weary of his increasingly authoritarian rule. He reversed his position a week later. In a video clip posted on social media that a United Nations official confirmed was filmed shortly before his departure from Gambia, Jammeh thanked Conde, seen standing beside him, as a "true friend." "Allah has decided that this is the end my time," he said. "When you are inflicted by something that you are not happy with, don't move away from Allah, but thank Allah because he is testing you." Rights groups accuse Jammeh of jailing, torturing and killing his political opponents while acquiring a vast fortune, including luxury cars and an estate in the United States, as most of his people remained impoverished. Thousands of Gambians sought asylum abroad over the years. An additional 45,000 people fled to Senegal amid growing fears of unrest in the wake of last month's election, according to the United Nations. Hundreds of Gambians carrying sacks, suitcases and cooking pots began returning by ferry from Senegal's Casamance region on Sunday. Hawa Jagne, 22, a cloth trader, hugged her sister Fama as she stepped off the boat. "I'm so relieved to see her," Jagne said. "Everyone is free. You can do whatever you want, because this is a democratic country. You can express yourself. No one can kill you."
Facebook
Twitter
Linkedin
Google